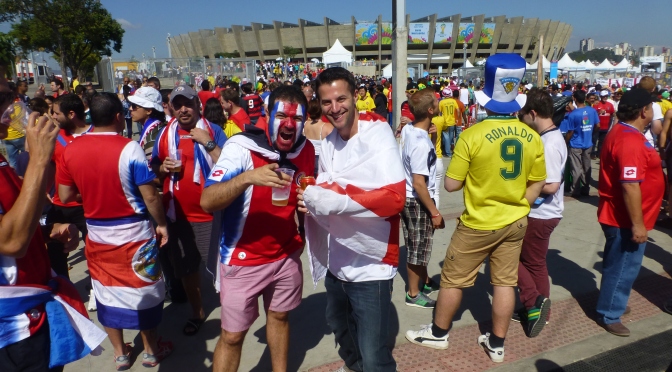 Following on from my previous post – (England’s Barmy Army – Party atmosphere leading up to the Costa Rica game) Our alarms went off at 7am, on a brisk, sunny morning in Belo Horizonte. It was the day of the game, my first time seeing England at a World Cup. As I mentioned in the last post, England were of course out by now, but we were going to enjoy it for what it was, a World Cup in Brazil ! We got ourselves sorted out, did a cheers for our first beer of the day, at 8am nonetheless and headed out the door towards the stadium.

The Estadio Mineirão holds 62,500 people and is the third largest in Brazil. We took a metro and then got on a bus and about an hour later arrived nearby the stadium.

Upon arriving, we soon noticed there was a great mix of supporters from around the globe. The walk towards the stadium was an impressive one, after passing a huge, beautiful man-made lake you can follow various streets around it, sloping up and down towards the Mineirão itself, sitting at the top.

END_OF_DOCUMENT_TOKEN_TO_BE_REPLACED

Way back last year, after the initial buzz and excitement of managing to get some tickets for England’s final group game v Costa Rica for the World Cup here in Brazil, I took a step back and thought… wait a minute…. just imagine if England lost their first two games, we’d be out by the time we went to see the one England game I had tickets for!! Surely not though, I thought, we’d at least still be in with a chance.

As we know now, that wasn’t the case as a distinctively average England side tumbled out of the World Cup after just two games. Two days before the third and final game of England’s tournament we headed off on an 23:59pm night bus from Rio de Janeiro to Belo Horizonte, six and a half hours away.  With us being out already, the true sense of excitement and the real buzz about the game had been cruelly taken away from us, even the tiniest of chances would of still kept us dreaming.  We left though, determined to enjoy it for what it was, watching England in a World Cup in Brazil, but there was still an overwhelming twinge of disappointment. END_OF_DOCUMENT_TOKEN_TO_BE_REPLACED

Rambling mumblings of an Englishman living in Rio